If you are visiting from the Festival of Frugality, welcome to Out of Debt Again! Thank you Mighty Bargain Hunter for the fantastic effort of hosting this event, and including my post!

Don’t forget to check out my recipe for soup using purslane. I’ve called it Weed Soup. 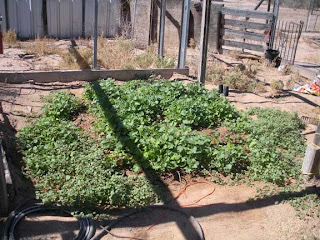 My garden is growing like gangbusters. Doesn’t it look pretty? There’s just one little problem. I knew my seeds were two years old, but I hoped they would still germinate. A few did, but wow, the weeds sure loved all the water!

One of the great things about having chickens and goats is they love weeds. The chickens love anything green, but the goats are much more selective. Goats, contrary to popular belief, do NOT eat everything. When people see a goat with a can dangling from its mouth, they assume the goat is eating the can. The fact is goats are very curious and like to taste things, kind of like babies. Even though they don’t eat everything, they do like to eat dry and fibrous items – especially brown paper bags. Also, some weeds are toxic so it’s important that I know what I’m feeding to the goats. Again the chickens don’t seem to be bothered by any weed I’ve ever given to them.

Since my garden was filled with weeds, and all you hear on the news is the disaster that our economy is in, I started wondering if these weeds were actually edible for humans. I mean, if our whole property is filled with all this food, why not take advantage of it? I don’t even have to plant seeds, they just come up. Wow. Free food! Just for the cost of water! 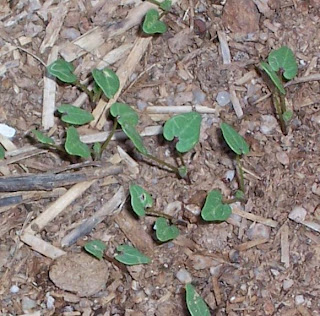 I already knew that the chickens and goats love the Malva parviflora aka known as cheeseweed mallow and little mallow. They actually prefer it dried rather than fresh. But I never quite put two and two together that humans can eat this weed. One year we had little mallow taller than me! Lots of rain that year. The cotyledons you see in the image above are Malva.

Next I got serious about identifying the purslane. I’ve had it in my garden before, but once again always pulled it and fed to the goats and chickens. I didn’t know what it was called until I started my research. I know I’ve seen it in the local stores that cater to the Hispanic community. In Spanish it’s called verdolagas. Its botanical name is Portulaca oleracea and it is also known as common purslane, little hogweed, pusley and pigweed. I took several photos and brought some in the house to see if I could make sure it was what I thought it was. Kind of hard when you bring in some purslane that happens to have rounder leaves than what all the photos show. It can be very dangerous to eat weeds that are toxic. People have actually died from doing this. I don’t have time to die from eating weeds from my garden.

When I was satisfied that the purslane was really purslane, I sauteed some in my cast iron skillet. Pretty tasty. I found a blog this morning where one commenter agreed with my assessment that some leaves have a lemony taste to them. This article attributes the “tartness” to purslane’s “oxalic-acid content (about the same as spinach)“. That further persuades me that I have purslane in my garden. Now I just need to find some recipes and try it. According to this site it’s packed with omega 3 fatty acids and one cup has only seven calories. Here’s more nutrient information quoted from Jessica Emerson of Santa Fe New Mexican:

It was one of the most important of the wild plant foods for the native peoples of the Southwest — Pueblo, Zuni, Navajo, Hopi, Tohono O’odom and others. The seed, ground and added to breads and stews, brought valuable protein to the diet. The leaves and stems are rich in nutrients. One cup of the leaves (100 grams) contains iron, vitamin A, calcium, vitamins C and E, phosphorus, zinc, magnesium, manganese and silica.

Wow! I need to develop a liking for purslane. Another site said it loves dry soil and grows YEAR ROUND. You can also grow it easily in a hanging basket. Here are some images of the purslane in my garden. As you can see in the first photo, (click on it to see a larger image) the leaves are elongated, but the remaining pictures show purslane that has more rounded leaves. The first photo also shows purslane that is more bushy, growing upward, while the others are growing flat to the ground. 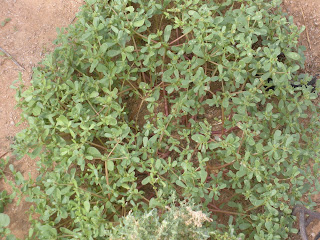 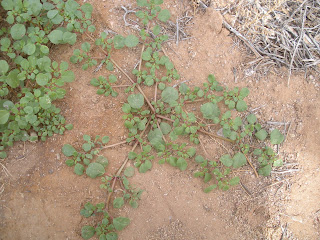 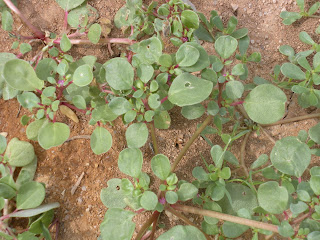 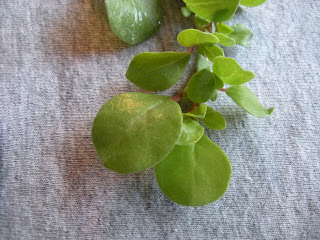 The third and most prolific weed I have not yet been able to identify. At the start of this identification process I checked my favorite weed identification book, Weeds of the West (this is a very expensive book – if you ever find one at a yard sale or in a thrift store for a couple dollars, buy it! I paid around $50 for mine, but it is an invaluable tool) and I thought it looked like Tumble Pigweed or Marshelder. But when I checked Google images, I couldn’t find a photo to perfectly match what I have in my garden. I am leaning toward it being Lambs Quarters – which IS edible. There are ways to test if a plant is edible. I did try eating a few leaves cooked, and it was somewhat bitter. However I haven’t seen any mention of Lambs Quarters being bitter.

When I figure out what it is, I’ll post an update. In the meantime, I have some weeding to do!

Her Mother is Rolling Over In Her Grave - a Credit Card Debt Story
My Grandma's Crocheted Easy Square Slippers
Carnivals this week!

6 thoughts on “Hate Weeds? Don’t Kill Them, Eat Them!”