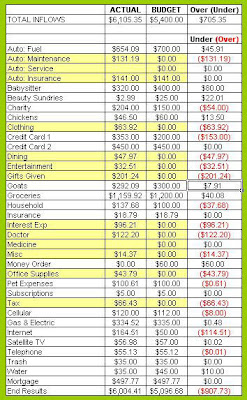 All right, time for true confessions… here’s what December looked like. Actually I had it figured out last weekend, but didn’t have a chance to convert my Quicken Report into Excel and analyze it, make the pretty screenshot and all that.

Luckily we received some gift money in December. Mr. Accountability’s mother promised that she would give him $500 last year in December, if he stayed a non-smoker. I’m so happy to report that Mr. A is a non-smoker for over a year, after smoking for 28 years! He quit smoking on November 20th, 2006. At the time he quit smoking, we were paying $37.90 for a carton of Marlboro cigarettes. The cost of cigarettes has gone up significantly in the past 14 months – we’ve seen prices as high as $6 a pack! Quitmeter is a site that will calculate the money you’ve saved by quitting smoking. Mr. A has been a non-smoker for 56 weeks, 15 hours, 32 minutes and 48 seconds! 🙂 7,852 cigarettes not smoked. Savings: $1487.95. Unfortunately, we did not snowflake this money toward our debt. I can only do so much, people, when it comes to putting the brakes on my entire family’s spending.

Okay, on to the update. My suggestion to put the money straight toward our debt was vetoed, and it ended up being a good thing as we spent extras for non-budgeted items anyway.

Instead of concentrating on the negative side of this whole situation (not doing such a good job at getting our budget under control!) I’m choosing to focus on the positive. At least we had enough money coming in to cover our expenses. No wait, we actually went in the hole again by $202.38. That’s because I thought since we had so much extra coming in, that I could pay extra money toward Credit Card #1. I was wrong. But we didn’t go in the hole on the credit cards since we were able to float some cash from Mr. A’s business “nest egg” account. It’s still positive though, because we can learn from our mistakes!

It is obvious my original outline of our budget is in need of some serious modifications. If you take a look at the screenshot above, you will notice the problem areas in yellow. I can think of a few solutions:

In the past, I was the sole person in charge of earning and spending the money. It is tougher, in my limited experience at blending the spending and earning of two people and their incomes, and there is definitely a learning curve.
Jerrold Mundis who wrote Get Out of Debt, Stay Out of Debt and Live Prosperously says to keep track of everything you spend for a period of time. If memory serves, he recommends one month before you even try to make a budget. I am starting to see that my original budget was too bare bones. While I’m not happy about it, knowing that fact actually make me feel better by helping me to understand why we were having trouble in the past year whittling down the credit card debt. When I’d look at my bare bones budget, I’d think we should have several hundred dollars to pay toward our debt, but when I crunch the actual numbers, we are still overspending by a couple hundred dollars each month.

I’ll get it right someday. Or, we’ll just have to start making more money! I still think it is important for us to learn to adhere to a budget. Here’s hoping we do better in January.