We used slightly more electricity this bill than last year at this time. However, notice that our bill was for 30 days this year, but only 29 last year which actually made our daily average usage less this year than last. Again, I’d rather see it go down a little bit, than up a bunch.

I’ve run a test on the electronics plugged in for my computer using the Kill-A-Watt.

Just for the sake of ease, let’s make that 15 hours, and 6 kilowatt hours. Even though I had it plugged in from 6:30am and 6:30 to 9am would be the off peak rate, let’s just use the higher rate. 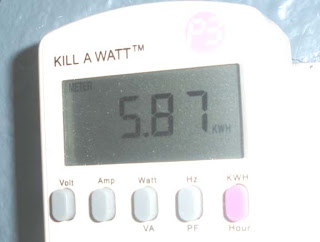 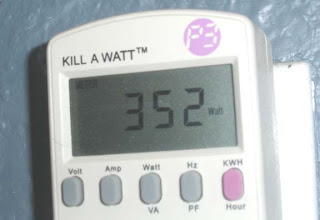 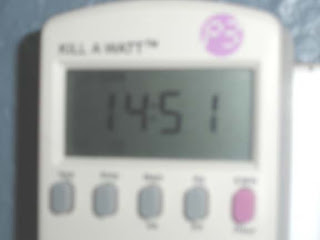 Oh and did something really stupid on the day I ran these tests. I steamed some fresh spinach for myself around 9am and then pushed the skillet to the side so it was tipped up and I could drain the liquid off the spinach. After the liquid was drained, I spooned my spinach from the skillet into my bowl, left the kitchen and went to my computer. About an hour later it felt like it was getting so hot and stuffy so I set up a fan. That’s not unusual since we keep the thermostat at 81°F during the more expensive (nearly 3x as much) on peak hours. Around NOON, I went into the kitchen only to discover the cast iron skillet tipped on the burner was burning hot, as DUH, I’d left the burner on! For three hours, on Friday, during ON PEAK hours. I felt really annoyed with myself.