I met several new bloggers by hosting the 130th Festival of Frugality on Tuesday and one of the bloggers I met was not only new to me, but he’s new to blogging. Too Smart to Live Like This [post archived at the Internet Archive] wrote yesterday prompted by a post of Paid Twice’s post What’s Your Life-Changing Money? and realized that his life-changing number was $3600. He reasoned if he could pay off two loans that would enable him free up an additional $900/month.

I started thinking about the various factors of solving this problem. First off, I don’t know all the details. One factor is that Too Smart got into a vicious cycle by needing to take a Payroll Advance loan. I’m assuming this is one of the places that charges your arm and leg for interest for the money you’ve been “advanced”. I am assuming the $600 is monthly interest he has to make on the Payroll Advance loan – he does say if he could pay back the $2000 he’d have $600 more a month. (If you visit, Too Smart, be sure to let me know if I’ve guessed wrong). Ouch, ouch, ouch. This kind of hurts to really think about it too much. It looks like Too Smart is paying 30% interest on that $2000. But maybe it’s only 25%. Let’s say it’s only 25%. I know those places are sharks, but they gotta have some mercy.

He also owes $1600 to a friend and he’s paying it back at $300/month. Hopefully that loan is interest free.

So without knowing all the details and just making some guesses… here is what I calculated.

Okay, let’s say if he could get $3600 somehow, right now, he could pay off the $2000 and eliminate the Payroll Advance loan’s $600 interest each month. He could also pay off the friend and eliminate the $300. So he’s freed up $900, but where’d the $3600 come from? Perhaps his employer? His father or mother-in-law? If someone was kind enough to loan him the money, interest, he could set up a balance transfer of $900 per month (like he did for his buddy) and apply it toward that debt faithfully until it’s repaid. That would take four months. Let me say that again.

Now, let’s say he continues on as he has been. But for simplicity’s sake let’s say he increases the friend’s payment to $320/month so this loan is gone in exactly five months. But he’s also rolling over the Payroll Advance loan and still paying interest every month.

Oh, I couldn’t stand figuring it out word for word any longer and opened up Excel and started plunking in numbers. This is what I came up with – you’ll have to click on it to see it unless you have a really big screen or magnification, or let’s face it, really good vision. I calculated if Too Smart is paying 25% interest, and stays steady as he has been with these payments, makes an accelerated payment using the $320 he was paying the friend toward the Payroll Advance loan in December, he will be done in January, and will have paid a total of $6212.65. 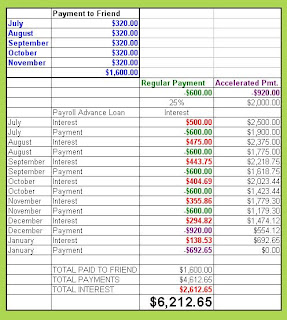 Too Smart – is there any way you can beg or borrow that $3600? Do you know ANYONE who could loan you $3600 for four months interest free? I remember reading you are in a bad situation financially, is your credit completely shot? I know credit cards are the wrong answer, but if you could get one with 0% interest, or even at 1% interest, you could still have the $3600 paid off in four months. As opposed to seven months, and an additional $2612 in interest.

Could you take on a part-time job for a few weeks to accelerate the payment schedule?

At any rate, if Too Smart can’t come up with the money or accelerate payments, this debt will come to an end in January (assuming the interest is 25%).

What would you do if you were Too Smart?

4 thoughts on “How Would You Solve Too Smart’s Dilemma?”