When I got home from work today I went out to check on the garden. One of our cats was in the garden, hunting what looked to be a Curve-Billed Thrasher. Between Mr. A and I, we were able to catch him and set him free.

This means there is a way into the garden for both birds, and cats. Drat! Thankfully the dogs had not discovered the bird or they would have been trying to find a way in as well. 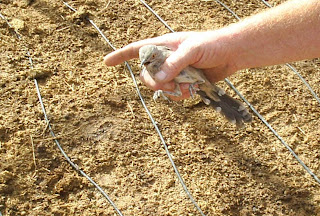 I also spotted these two little cotyledons. But I know what they are. They’ve popped up in my garden in the past. They are Little Mallow Malva parviflora Mallow Family ( Malvaceae ) Little Mallow: Also called Cheeseweed, Alkali Mallow, or Small-Whorl Mallow. A weed, but an edible weed. Our goats LOVE them. This weed grows freely all over our property. A few years ago when we got a lot of rain, they grew to be taller than me! I knew this weed was edible, but check out these blogs for more information on eating mallow: Homegrown Evolution and Your Edible Landscape by Linda Runyon. Awesome, I will definitely have to try this weed as it comes up this year.

These two babies will have to come out, though. They’d overwhelm the small garden area they are growing in. 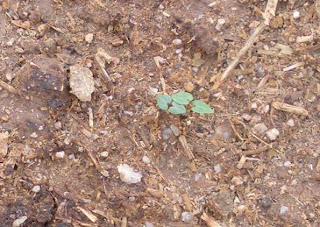 And more cotyledons… radishes!! A mere 48 hours and my radishes have begun germinating and their seed leaves are peeking out. 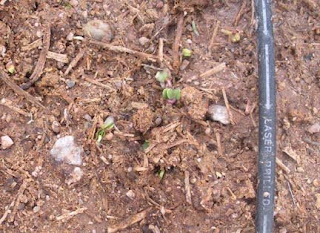 What does this have to do with personal finance? Well, Paid Twice got me thinking with her post about saving money on her homegrown tomatoes. I hope to save us some money on salad ingredients and vegetables over the next few months – cool season planting in the desert runs from September to March/April. I bought my seeds in November of 2006, which were produced to be planted in 2007. I bought 31 packages of seeds, and paid $5.25 shipping. $40.70 total. That is the most money I’ve ever spent on seeds in one year, and I never got my garden planted in the winter of 2006/2007.

I love radishes, but I have stopped buying them since they are running $0.89 per bunch (10-12 small radishes). My package of radishes cost me $0.75 and contains 300 seeds. If only 150 seeds germinate, my radishes will cost me about $0.005 each. So we’re looking at one dozen radishes for six cents. Whoooo! We haul our own water and pay $4.00 for each 1000 gallons, so the amount of water to produce these radishes may cost about a nickel for a whole bunch of them. Thankfully I don’t have to purchase compost, since my dairy goats and chickens and in the past turkeys, have produced enough soil enhancing product to plant an acre’s worth of garden.

I may be counting my chicks before they hatch again but I am trying not to get my hopes up too high. Over the last eight years we’ve lived here I’ve battled the following:

I may have to work out a secondary ground cover while the baby plants are getting a start. I am so anxious to have some fresh Swiss Chard. At least Frugal Babe doesn’t have to worry about all these pests in her hydroponic garden. I was wondering about gnats, and wondered if those might become an issue as they have for me in the past when I have started my tomatoes indoors.

I’d like to try this recipe once the kale comes up. Speaking of kale, I’ve never grown it in my garden, but it’s AJ’s favorite. I don’t much care for the store bought variety, but garden fresh often tastes much better, so I’m eager to try it fresh.

What I Found In My Bathroom Last Night
New Computers At Work
Upright Gardening: A Use For Hay Twine

3 thoughts on “Visitors in the Garden”