I have always loved taking pictures. My paternal grandmother did, too. My dad, God bless him, went to the trouble to scan each and every photo and burn them to disk. It was no easy task, considering my father lost his right arm a couple of decades ago. He was from the time period when it was a terrible thing to be left handed. He told me he was punished from a very young age for using his left hand, and forced to become right handed. Then in a terrible accident of his own doing, he lost his right arm just above his elbow. My dad uses alcohol and drugs to numb himself, and one day he passed out, on his arm, ended up with a blood clot and lost his arm. At least that’s the story I’ve been told. He’s still alive, I just cut off communication with him because he was too poisonous to stay in contact with. Ironic that he spent his entire life using his right hand, against the nature of his body, and then ended up losing it. His writing with his left hand is terrible since he never practiced writing with it. Anyway, I didn’t mean to get into a story about my dad. Here’s a picture of him and my paternal grandmother in 1949. Grandma played the mandolin, although I’m not sure what she is playing in the picture. 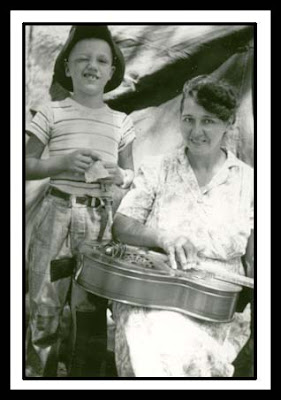 My maternal grandmother on the other hand, was one of those folks who couldn’t (wouldn’t?) use up a roll of 12 photos in a year’s time. But come to think of it, it was probably her extreme frugal nature which prevented her from spending money on buying or developing film.

My mom doesn’t take many photos either. She actually bought a digital camera about three years ago, but never uses it. She has told me what she really wants to get, is a good 35mm camera. Do they sell those still? I think the big rage are DSLR cameras.

When my children were babies, I took a lot of photos, and I had a lot of time to work on albums. Scrapbooking wasn’t around yet, or at least I’d never heard of it in the mid-80s. When we went through the poverty years there was little money to buy film and none for developing pictures. When I finally had some extra money I developed over a dozen rolls of film I’d been hanging onto for several years.

By 2002, my employer had purchased its first digital camera. It was state of the art at the time. Its card held a whopping four images at the highest resolution, which was barely high enough to produce a nice 4×6 photo. I persuaded my boss to buy a bigger card, and a card reader. I could take 20 pictures at the maximum resolution. It’s almost funny to think about it. About three years later we got a replacement. I carried the cameras with me much of the time, to learn how to use them, and also because I didn’t have one of my own. Finally this year, when my employer’s camera starting acting up, I decided I wanted my own camera.

Something that you probably already know is that real photographers take dozens and hundreds of pictures to get just a few excellent photos. It was like sheer agony two decades ago, taking pictures with a camera that used film. I couldn’t afford to use an entire roll of film to get one excellent picture, and I couldn’t afford to take the whole roll in and have it developed instantly, so pretty much I had to settle for whatever pictures came back, and be happy with it.

But now with digital cameras, you too can be like the professionals. Just make a point to take lots of pictures. It is interesting, when I’m photographing people, they only want to pose for one shot. They don’t want to wait while I take two or three or ten photos, in hopes of getting a really good one. But if you just take one, invariably you get someone with open mouth, closed eyes, grimacing or some other unfavorable pose. Especially if you’re taking a photo of two or more people. I have to tell people to let me take several pictures.

Another nice item to have is a tripod. I have two, a full sized tripod, and my cute little Gorillapod which really comes in handy for macro shots.

What I really love is I can take two hundred photos, pull out the best two or three and I’ve spent nothing except the battery power to take the 200 photos. My battery is rechargeable, and costs only a fraction of energy to charge the battery. I used to favor AA batteries, but I now prefer having two rechargeables. I just carry the charged one with me and put the discharged one on the charger as soon as I have a chance.

Last night I took 42 shots of the sunset, and here is the one I liked the most. I didn’t even Photoshop it. We get some awesome sunsets out here. 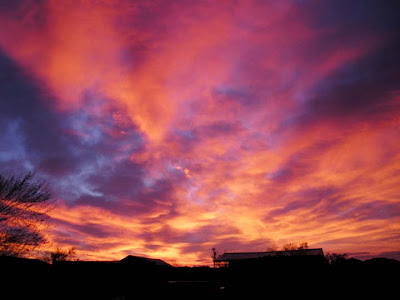 Do You Qualify to be -Truly- Frugal?
Is It Just MY Vacuum Cleaner?
Wedding Under $3000