Yes, you heard that right.  I’m a woman, and yet I wear the most comfortable men’s shoes. They are called Nevados Madison and I found them at Big 5 Sporting Goods. They often go on sale for $19.99 a pair and I stocked up when I found them for that price.  The Nevados Arlington has the same thick sole, but they are more masculine looking than the Madison. The Madison, in my opinion, passes nicely for a black sneaker or sports shoe, so I can wear them with jeans and don’t look too goofy.

Let me tell you the story about how I found my shoes.

I’ve mentioned that I’m afflicted with Plantar Fasciitis before. Two weeks ago my feet started hurting a lot worse than usual. The biggest problem is that the insoles in my shoes were totally worn down to nothing. I tried a couple of things but my feet kept getting worse, so I decided I had to get a new pair of shoes. Hopefully something with some cushioning to the insole.

Mr. A and I went to a few stores but found nothing that was going to work. After four stores I said we should just go to Big 5 Sporting Goods because that is where we always end up buying our shoes anyway.

I was nearly to the point of tears when we got there, my feet were hurting so bad. The young shoe salesman approached and asked if he could help me. Here’s how the conversation went:

Me: What shoe can you recommend that has the most cushioning?

Shoe Guy: Those New Balance that you were looking at are the best in the store.

Me, pressing into the insole: They don’t have much cushioning.

Shoe Guy: Why don’t you try them on? They usually feel much more comfortable once you put them on.

Me: Interesting. My experience has been directly opposite. Some shoes actually feel as if they have cushioning and once I get them on my feet it turns out they have no cushioning to speak of.

Shoe Guy: Well, those shoes are the best we have.

Me, reluctantly: Okay, I’d like to try them in size 9.

Now I wear at size 8.5 but the additional inserts I have to wear to make up for the non-existent padding make for a squished experience for my foot.

Last week, Mr. A and I bought two different pairs of inserts from the drugstore to see if either kind would work. We do that periodically, hoping to find the magical insert to relieve our pain. That’s partly why my feet were killing me, because the stupid inserts do little good if any.

So I’m sitting there, trying on the shoe, I’d taken the insert from my horrible shoe and put it into the new one to see if it would work.

I felt so hopeless, my foot felt squished into the shoe. And then my knight-in-shining armor, my darling husband, shoed up, I mean showed up with a lovely shoe which had mega-cushioning.

We asked one of the other shoe people (the other guy had disappeared even though he’d said he would be right back) for the size I thought I’d need. I tried it on, and I almost started crying tears of joy. My feet, even though they’d been aching desperately just moments ago, felt much better!!

I’ve been reading some more about Plantar Fasciitis and it seems one must stop going barefoot for any length of time, even the middle of the night trip to the toilet warrants shoe wearing. So I’ve been using this pair of shoes any time I need to be on my feet, well, except for showering. I even wore them to church on Sunday! They look great with jeans, and don’t even look like men’s shoes. Here’s a picture of them: 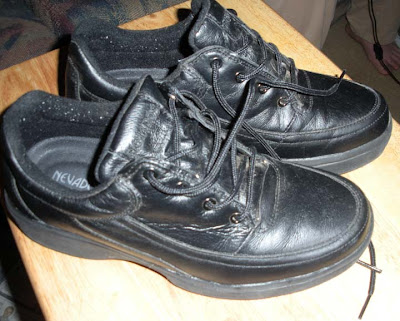 By Monday (yesterday), I am beginning to feel there is hope for my feet!! They might be able to heal if I keep wearing these lovely shoes! But the only problem is, they might run out of them. I was seriously considering buying another couple of pairs. Like I have the money for that!!

I looked on the Internet to see if I could find them cheaper, but they don’t even have them on Zappos. In case you are interested, they are called Nevados Madison. I had the hardest time finding a website for them, but finally found this one, which seems to be in Spanish. During my searches, I did find some old advertisements for the Big 5 in California which expired a few months ago, and the shoes were on sale for $19.99. I thought, Maybe the shoes will go on sale sometime soon? And then on a whim, I decided to look at Big 5’s weekly ad online. With much joy and happiness, I discovered they are on sale this week for $19.99!!!

At lunch I drove to the nearest Big 5 to see if they had any of my size in stock. They didn’t, but they checked their computer, and discovered that another store not too far away had 1 pair of my size, and I’d decided to get a pair for Mr. A, to see if they would help his feet, too. They had one pair for each of us. The guy had the other store put a hold on the shoes for us. While he was on the phone, I asked the other cashier who was there if she knew if they had a price guarantee. I explained that I’d just bought my shoes on Friday for $54.99 and now they were on sale for $19.99. She responded, “Oh sure, just bring in the receipt and we’ll refund the difference. As long as it’s within 30 days.”

Yippeee!!! I was so happy to hear that!! I was conniving in my mind as to how I would get my money back – I thought maybe I’d have to take the new pair back and then rebuy it. But they made it very easy on me.

When the other guy got off the phone, he says to me, “You probably paid $19.99 for your shoes.” I said, “Excuse me?” He repeated himself. I said, “Is that so?” He said, “Yes, sometimes the sale starts a day earlier than the ad comes out, so you probably got your shoes for the sale price.” I looked him right in the eye and I said, “Nope, I actually paid cash for these, sixty dollars cash.”

I keep wondering what in the world that meant. He must be one of those people who doesn’t look at the price of anything he buys, and never examines the receipt. He obviously didn’t know who he was talking to…

While I was at the Big 5 site, I signed up for their email list, and they sent me a 10% off coupon.

My boss buys six pairs of shoes at a time when she finds some that she likes. She only wears tennis shoes, and she goes barefooted the rest of the time. So I thought for $17.99 a pair (after the 10% discount!) I’d do the same.

I was met with some resistance due to the fact that only one pair of my size seems to have been shipped to the thirty-some stores in the Phoenix and surrounding areas. I guess size 8 is an unpopular size for men. Teehee. I was trying to figure out how I was going to drive to all these stores, when I decided to let my fingers do the walking. You know, made a phone call. I called the corporate office, and they told me all I had to do was call my local store and have them order several pair.

So I called the store I’d gone to yesterday, to pick up the shoes being held, and got the very polite young man on the phone again. I recognized his name, and I thanked him for holding the shoes for me, and told him I’d picked them up and really appreciated his help. I then told him what the corporate office had told me, and asked him if he knew how to do that. He told me what they usually did was call the other stores and ask them to ship the size to the store and then they would let me know when they come in. I asked him if I should go ahead and pay for them first? He said that would be fine, but they could also issue me a raincheck.

I also found out that the Nevados Arlington has the same cushioned insole. These shoes are not easy to find on the Internet! I am planning to call the company and see if the cushioned insoles can be purchased separately. The shoes look to be well made, and the tag claims they are made of real leather. I know the insoles will wear down as time goes by, so if I could just get more insoles that would be awesome. I checked while at Big 5 – not all of their shoes has the same insole. None of the women’s shoes had the thick insole.

I didn’t have my receipt with me (for the first pair, for which I paid $54.99 + tax) when I picked up the other pair of shoes, but I will be getting my money back and buying a few more pair. I also decided to give our janitor at work at pair as she is on her feet all the time and her feet bother her, too. She asked me how much they cost and I hugged her and said how about we just consider them an early Christmas present? I hope they are as comfortable for her as they have been for me.

Do you have problems with your feet?  What is the most comfortable shoe you’ve found?