On Sunday I blogged about how it looked like our debt had only increased by $1400, which I figured made sense since we bought $2400 worth of machinery for Mr. A’s business. We were able to absorb $1000, I happily rationalized.

That was before yesterday happened.

Around 10am, Mr. A calls me to let me know one of the tires of our Ford F150 just flew off while he was driving down the road doing 55mph. Four of the five lug bolts were sheared off in the process leaving one lug bolt intact. Luckily that one bolt retained the drum cover in place which prevented the brake system from being ripped from the underside of the vehicle. As Mr. A came to a screeching halt at the side of the road and looked in the rear view mirror, the tire came rolling along behind him. It would be funny if it wasn’t so scary.

I was pretty sure our towing insurance had lapsed, so I put in a call to the company to see if I was correct.

Stupidly, I go back and forth on keeping it current for a number of reasons. First of all, Mr. A doesn’t particularly like the company because they take 2-3 hours to arrive. Secondly, since he’s such a handy guy we really rarely need them. For example, we don’t use them for unlocking our car doors, or changing tires or jumping our batteries, or bringing gasoline to us, etc. We have needed a tow two times since moving out here (okay three, counting today). I paid $91 for the service five years in a row, ($455 – so I really debate “wasting” the money on the service) and have only needed towing thrice in six years. Furthermore, that $91 only covers me. If Mr. A or our son needs a tow, I still need to drive to where the vehicle is and present the card. Before you ask, no, our auto insurance doesn’t include towing. It is a bare bones policy, that is why it’s only $614 for six months with an 18 year old male driver included.

Back to my phone call to the company. I explained we needed a tow and I was not sure if my policy was intact or expired. The representative looked me up and told me they would be able to help us as long as I could pay for the policy renewal immediately. So I pulled out the credit card and she charged me $91. In the meantime, Mr. A was on the phone with the towing guy he’d used a few weeks ago to remove the heavy machinery from our truck. They quoted him an estimate of $175 stated they were actually in route to where he was and would be there in 15 minutes. Mr. A knew our towing insurance had lapsed, so thought we didn’t have any other options.

Not knowing this arrangement was being made, I left work planning call Mr. A and let him know the policy was reinstated. When I finally got him on the phone, he was in no mood to wait around for 2-3 hours especially since his guy was already in route (I honestly can’t say I blamed him). I stewed for a while as I drove, but realized if I’d kept the policy current then Mr. A would have used them, in spite of not liking their service.

Mr. A thought the owner was on the way, but it turned out to be one of his other drivers. The guy ended up only charging us $125, but I am still cringing because if we’d used the towing insurance company we’d only be out $91, instead of $216. But then again, we were able to be on our way within half an hour, instead of waiting hours.

I couldn’t get over the way the tow truck driver was dressed. Normally they are dressed in jeans, with work boots and wear gloves since they have to handle hot, heavy chains and scoot under the vehicle to wrap the chains around the tires. That pavement gets hot, as does the bed of the tow truck. Check out this guy, he’s wearing shorts made of very thin material, which looked to be that nylon material that guys wear over football equipment, and FLIP-FLOPS on his feet. Is that hilarious or just sheer stupidity? 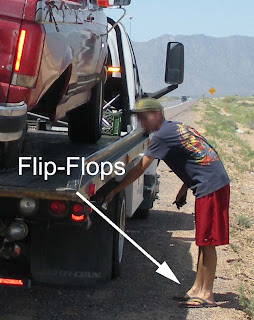 He also didn’t wear gloves at all. I just couldn’t get over how inappropriately he was dressed. That metal gets seriously hot, how can you do a job correctly if you can’t even hold onto something for it burning your fingers? He seemed to be a bright fellow as he talked to us. I just don’t know about people nowadays – it seems they don’t think ahead or something (who wears flip-flops to work anywhere – unless you are a lifeguard at the public pool, lol). I don’t know, maybe it’s just me, but it just amazed me to see him dressed like he was going surfing or to the mall. I guess seeing other tow truck drivers all decked out in protective gear, I’ve always noticed that they are so careful to keep their bodies well protected from the hot metal they have to deal with in these hot summers. Ah well, but my story doesn’t end there.

Mr. A and I went on into town, while our truck was towed home. We went to a company which is known for “pinching pennies” as they had the best deal on the repair parts that were needed.

I was particularly impressed with their little slips of paper that they write down the parts numbers. Recycled paper, cut into little squares. 🙂 That box you see in the photo is full of little slips of paper that they all use to write down the part number and then you take it with you to the cashier. I just thought that was so cool that they recycle to that extent and I commented to the cashier they were “pinching those pennies”. She grinned and said why not recycle, they were just going to throw them away anyway. 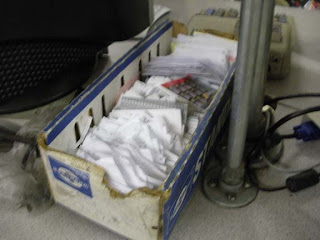 Another $50 for the parts. Not too much. It probably would have cost about the same amount as we spent on towing, towing insurance and for the part had we needed a mechanic to do the work for us. Once we got home Mr. A and our youngest son set to work fixing the truck and it’s all back together. Whew.

After that we had to go to Costco for supplies for our businesses which came to $75.

Then we stopped at a grocery store on the way home and spent another $24.

I wondered if the madness would ever end?!

So for this moment in time, we are now an additional $1600 in debt (up from the $1400 on Sunday). Unfortunately, I need to order another $100 worth of supplements (I decided if we can spend $$$ on tools, then my body is the most important tool I use and I need to take care of it appropriately).

I am also seriously contemplating upgrading our towing insurance to include Mr. A and our son so if they do need to get towed, I won’t have to drive there to present the card. To have the three of us covered, instead of $91, it costs just over $200 per year. That ends up being around $16 a month. I think it may just have to fall under the expense of “Peace of Mind”.

Because we do travel such far distances from our home, (today Mr. A was only 30 miles from home and it cost $125) if we only get towed one time in a year, the towing insurance would pay for itself. Add to that the cost of my having to drive to wherever the vehicle is disabled, with the price of gasoline. Also factor in that my vehicle is 12 years old, and Mr. A’s truck is 19 years old, well, things happen.

The representative told me we could get by with the “Classic” policy, because no matter how far away from home we are, they will tow you five miles or “however many miles it takes to get your vehicle to an approved repair facility”. Well, Mr. A does most of the repairs, so we’ve almost always had our vehicles towed home.

I have to tell myself to just take deep breaths, because Mr. A’s business is doing well and for all I know he could make enough money by the end of the month for our regularly budgeted expenses, plus this additional debt.

I’m confident today will be a better day.

1 thought on “If You Drive A Lot, Make Sure You Have Towing Insurance”