I decided I needed to get some things returned that we’d bought and found we didn’t need after all.

Mr. A bought a pair of jeans from Costco in his size, but they didn’t fit. They’re too long for me, so I took them with me when I went into work today. Costco is so good at taking back returns. I used $10 of the cash back to pay the copay on my asthma medication from Costco Pharmacy.

I also bought Zyrtec for my son from Costco, it was $24.99 for 45 tablets ($0.55/tablet) from Walmart, but $32.99 for 75 from Costco ($0.44/tablet). This is one of the medications that the doctor suggested we try for him. I really hate taking medicine, or making my son take it, but it has really cut down on the hacking, coughing and spitting that he was doing without it. My boss says she experiences the post nasal drip and it is really aggravating, so she can relate. I think there are generics – once we determine if the name brand really helps, maybe we can try the generic.

After I got off work, I had to go by an outlet mall to return two pairs of shorts we’d picked up from Casual Male. One pair was too small, the other too big. We bought them on July 22nd, so I wasn’t even sure if the store would allow me to return them, since it’s been over 30 days.

I usually always use this one entrance but I thought I’d try a different one, to see if it was any less distance. I used to try to get as much walking in as I could, but with the condition of my foot, now I’m trying to walk less. I saw some double glass doors and I wondered if that was an entrance. I was looking to see if I could see a sign or anything to clue me in. There were two people about 20 feet away from me, talking about the area behind their store. One person was telling the other person the things that needed to be done to get it cleaned up.

Right about then, I tripped in the pothole. I landed real hard. I’m okay, just some scrapes and I’m sure I’ll have aches and pains tomorrow along with bruising. I landed on the palm of my hands and my left knee, and hit the blacktop with my right cheekbone. My glasses got damaged.

I’m really paranoid about my glasses since they are expensive. Essentially I wear trifocals, but I get progressives so the lines don’t impair my vision (okay, and so people can’t tell I’m wearing *trifocals*).

Some day I’ll tell you more about my eyeglasses phobias, but I promised AJ I’d come talk to him in five minutes.

I was stunned slightly and was laying in the pothole kind of, trying to get my bearings, when a man came over and asked me if I was okay and gave me his arm. I explained I’d been looking at the doors trying to figure out if they were an entrance or not and didn’t see the pothole. Then another young man came up and said it was an entrance because he worked there.

After trying to bend my glasses back into shape for about a minute, I finally started over to the glass doors and once I was up on my feet again, the people behind the wall came out and started talking again. As I walked past them, I heard the lady talking about how this needs to be cleaned up and I said, “And that pothole that I just fell into needs to be taken care of, too!” I went through the store and into the mall. I’m quite near sighted, so this was a feat in itself. I got into the mall and hoped there was an eyeglasses store somewhere nearby. Luckily for me, there was one just two stores over. I stopped in the store, and by now I’m almost crying because I fell down and I’m really scared that my glasses are too badly damaged, plus I’m freaking out because here is YET ANOTHER expense that we haven’t been able to plan for. I KNOW that I need glasses every 2-3 years and I should be saving for them, but I haven’t had the money to put aside.

The guy pointed to a sign and said he couldn’t make any guarantees. I had to walk over to the sign to read it, and told him to please do his best, because I can’t see with them the way they are now, and I still have to drive 40 miles home. If you wear bifocals, trifocals or progressives, you will be able to relate with my predicament. The top part of my glasses give me 20-20 vision for distance, the middle part gives me 20-20 for the computer distance and the lower part gives me 20-20 for reading. So when my glasses were lopsided, it was impossible to see straight at all!

He was able to straighten my glasses, but the right lens is scratched pretty badly almost in my line of vision. The frames have roadrash where I landed on them. There are also two spots that look like the lenses are dinged, like when a rock dings your windshield.

Casual Male took mercy upon me and gave me the money back on the clothes, even though it was over 30 days. The guy said he had to keep my old receipt though, for inventory. Whatever. I was nearly weeping by that point. I asked him where the mall management was, and luckily it was just a couple of stores down. I stopped there, and they told me I had to talk to security. So I went to security and they asked me if I wanted them to call paramedics. I declined, then the supervisor showed up. He was courteous and comforting and filled out a report. They took a picture of the bottom of my shoe. I asked why and they said the mall wants to know if a person who falls is wearing flip-flops.

They told me they have to put falls and slips into the system within 24 hours, and he told me if I had to get a report or anything if I had to go to the doctor, it would be available tomorrow at this time.

My “foster mother” looked for opportunities to sue people. One time, one of her sons broke his ankle at one place, but waited until he got to another place to “fall down” and claim he’d broken the ankle. I thought it was just horrible. I don’t like to sue people.

I wish they would help me purchase a new pair of glasses though… I really should probably have a new pair now with the scratches and dings.

Here’s the pothole I fell into. The security guards took pictures, and put up orange pylons. I also took some pictures. You can see how someone tried to fix this pothole before, but with cars driving over it, the material just squished out to the side. 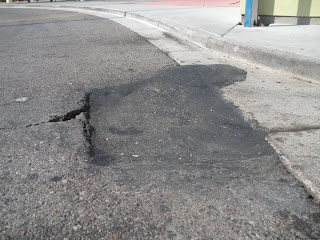 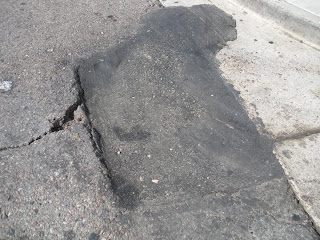 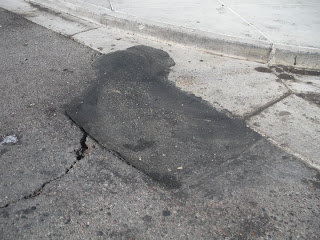 I’m really grateful that my glasses weren’t brand new; at least they are two years old already. It would be horrible if they were brand new.

I’m also really grateful I didn’t break my front teeth (another of my phobias).

I’m glad I didn’t break anything. I didn’t even break the skin. I just have a few scrapes. My left arm is having some muscle spasms, and my neck feels stiff. But that’s to be expected after a hard fall onto blacktop.

I also confirmed for myself that blacktop in the summer is very hot to lay on. I am shocked sometimes when I see motorcyclists riding down the freeway, with short sleeved shirts, shorts and flip-flops! Don’t they know that blacktop is hot and roadrash is no fun at all! They have to scrub the gravel and rocks out of your wounds.

I’m glad I was wearing jeans.

9 thoughts on “I Fell in a Pothole at the Mall”